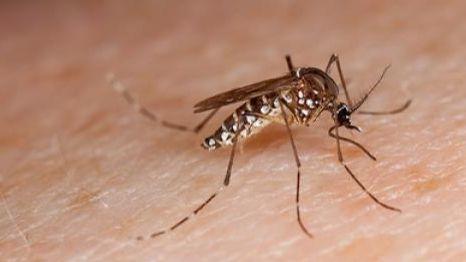 Report: Climate Change Increasing Connecticut's Risk For Mosquito-Borne Disease
Disease-carrying Asian tiger mosquitoes are expected to spread all across Connecticut as a result of warming conditions related to climate change, according to a state report.

The invasive and aggressive Asian tiger mosquito, capable of infecting people with rare diseases like the Zika virus and dengue fever, is now expected to spread through almost all of Connecticut by 2040, according to a new state report.

The Council on Environmental Quality’s annual report also warns that “Infection rates of West Nile Virus and other mosquito-borne diseases are likely to rise as a warming climate creates more favorable habitats for mosquitoes.”

The state’s Mosquito Management Program began its seasonal trapping and testing program this week. The program, coordinated by the Connecticut Agricultural Experiment Station, monitors the types, numbers and locations of mosquitoes and tests them for the presence of viruses that can cause illness. The first test results will be available starting mid-June; there are 91 mosquito-trapping stations in 72 municipalities throughout Connecticut.

Asian tiger mosquitoes were first detected in Connecticut in 2006 and have been “increasing in abundance and distribution,” said Philip Armstrong, director of the mosquito monitoring program at the Connecticut Agricultural Experiment Station.

Infection rates of West Nile Virus and other mosquito-borne diseases are likely to rise as a warming climate creates more favorable habitats for mosquitoes.— Connecticut Council on Environmental Quality.

Experts like Armstrong point out that mosquito-borne diseases like the Zika virus, dengue fever, and West Nile virus are still very rare in the U.S., and are seldom fatal. The West Nile virus, for example, has been in Connecticut since 1999 and only 131 cases have been identified, with just three deaths attributed to the disease.

The federal Centers for Disease Control and Prevention says on its website that there were 5,700 cases of Zika virus reported in the U.S. between 2015 and May 2018. Only 231 of those cases were linked to infection from a mosquito.

“I don’t want to scare anyone,” said Armstrong, who was a co-author of a study published last year on the spread of Asian tiger mosquitoes in this state. He said the diseases spread by this type of mosquito are most common in countries with extensive poverty, poor infrastructure and housing that lacks screens and air conditioning.

The Council on Environmental Quality is the state’s official environmental watchdog and publishes an annual update on how Connecticut is doing in preserving and protecting its air, land, water and wildlife.

It is our most aggressive human-biting mosquito that we have in Connecticut.— Philip Armstrong, director of Connecticut Agricultural Experiment Station's mosquito monitoring program.

A major concern of the council in recent years is the impact climate change is having in Connecticut as global temperatures and sea levels continue to rise. Most climate scientists are predicting that temperatures in New England will continue to climb gradually, producing warmer and wetter conditions ideal for mosquitoes.

The council’s report also cites a 2018 CDC study showing that “illnesses transmitted by mosquitoes more than tripled in the U.S. from 2004 to 2016.”

“It is our most aggressive human-biting mosquito that we have in Connecticut,” Armstrong said. “It’s been involved in transmitting these viruses in some unlikely places,” he added, citing outbreaks of mosquito-borne diseases in Japan and Italy in recent years.

These mosquitoes become carriers of these viruses by biting people already infected with these diseases, usually travelers returning to the U.S. from parts of the world where such illnesses are far more common, Armstrong said.

Armstrong said the prediction that the Asian tiger species could spread through most of Connecticut by 2040 as a result of climate change “would be plausible.”

Warmer temperatures are more likely to make mosquitoes breed, get infected, and transmit disease at a faster rate.— Council on Environmental Quality report.

The spread of this type of mosquito across the state began along the southwestern Connecticut shoreline and gradually moved eastward on the coast of Long Island Sound and further inland.

During the summer and fall of 2017, Connecticut Agricultural Experiment Station scientists trapped and tested almost 200,000 mosquitoes and found West Nile virus was present in mosquitoes located in 30 cities and towns in six counties.

Program officials reported that the majority of West Nile virus-infected mosquitoes continued to be found in city and suburban areas in southwestern Connecticut and in the Hartford region in central Connecticut.